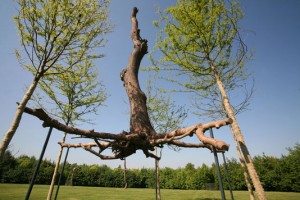 At first Reinier Lagendijk’s work reminded me of the work of Giuseppe Penone. Who doesn’t know the bronze hand gripped around a thin treetrunk, grown completely into the wood over time? Or his “Elevazione” in Rotterdam, that shows a bronze replica of a barren tree, connected to five real, growing poplars wich have elevated the replica during time.

There is a big difference. Penone’s work is mostley defined by the coincidences of the growth process wich determine the poetic impact, while Lagendijk is more in control of this process and he decides, upfront, on the result . That’s why he’s known as a bio-artist; he takes control over nature.

This is evident in his early work, like ‘ Willow and Saw-Horse’ (1997) in wich he forces a trunk of a willow -a robustious tree- to sprout again with no more but a branch in the water. In “N.T.” (roots,1999), a fig is rooting in a mould that is shaped as a chair and a table. The endresult only lasted for a short while. The same applies for ‘ Grass Cactus’, 2001 (grass and terracotta) Cacti made of strictly upward growing, pointy grass. Objects such as these, have to be made over and over again. In the successful ‘ Willow and Steel’ the growth process as a subject is literally translated by attaching steel rungs to two trees to depict a ladder. In this work Lagendijk approaches the work of his collegue Penone the closest, not only in it’s appearance but also in his references to higher powers. However, that is bound to happen when the finit growth process forms part of your work.

And still there is a difference. Penone uses the superior bronze when he interferes with this natural process. Lagendijk mainly uses inferior plastic and steel; materials that have a totally different power of expression. For example in the work, “N.T. Willow branches, Soil, 2000”, Willows grow out of bags of soil sitting on the sidewalk, apparently spread out with nonchalance. An enlargement of the combination nature and the wholesale trade, as you can come across at garden centres. Veiling this fact by constructing romantic gardens in the suburbs.

Where many sculptors who work with wood, try hard to fit their work into the organic waves of the wood grains, Lagendijk has found his own way to resonance this material. Of this, ‘ Willow and Saw-Horse’ is a good example, as is the axe shaped by a living willow. Both saw-horse and axe are made from the wood that you can obtain by using axe and saw-horse. 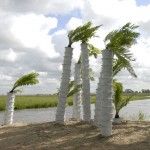 And then there is the resonance of shape. The one of steel pile shaped as a tree, wich has bushes hanging from it’s branches, or a Palm made out of piled-up white buckets, the upper one carrying a big Fearn, waving in the wind. (“N.T., 2006”)

It is often the combination of plastic garden bucket and living nature that gives Lagendijk’s work a somewhat poignant character, sadly enough that’s the way reality manifests itself frequently to us.

For the project ‘ The Greenhouse’ in Utrecht (2006) there were Green beans growing in big, emptied bean cans, focussing in on mass consumption and the technological drive of nature to make this possible.

But to say only a critical dimension exists in Lagendijks work, is far from accurate. In the 18th century Abbe Laugier believed that the archaic architecture- the one of a Greek temple- falls back to primitive, prehistoric imagery: branches of trees growing, in an angle, towards eachother, forming a natural pointed roof. Lagendijk used this concept in a variety of sculptures an installations.

For example the wooden frame of a small house has partially been constructed with living trees. Again he creates a house-shaped object for a roundabout at Leusden, this time made out of bricks. At the top, the walls recede like an opening flowerbud, to offer space to a high tree planted inside. (“Villa Lisiduna” , 2005)

Ultimately it’s not necessarily the tree or plant he has to use, as material, to combine nature and culture, either to show them collide or to show their historical divergence. A stack of paper, on each leaf a print, depicting a cut-through tree trunk, dissevered in two halves. Or paper on which, prints of Autumnleaves, crushed in the corner of a room: it’s obvious.. 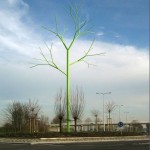 Also in a recently completed assignment, a sculpture placed on a roundabout commisioned by the town of Spijkenisse, mainly industrial materials have been used. A high, loudgreen steel pile is connected to two little trees and is towering far above them. It seems like the branches of steel have been developed using a mathematical formula, each branch welded on in an angle of 60 degrees. This makes the tree , combined with the- far- from natural green, looking rather like a product of home-industry than a product of nature.

Lagendijk’s fascination for trees started during his studies at the art academy AKI in Enschede, where, instead of making art, he spent long periods of time in the woods. In Holland woods are by definition layed out. It seems rather strange to call someone, developing a love for artificial woods, a bio-artist. I would rather call him a gardener; an Artist – Gardener.